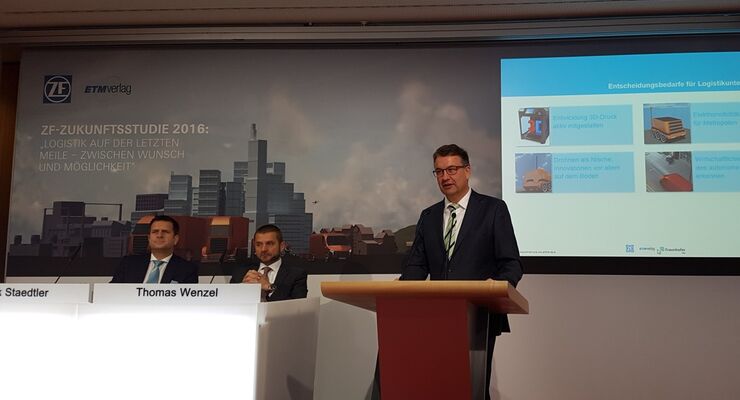 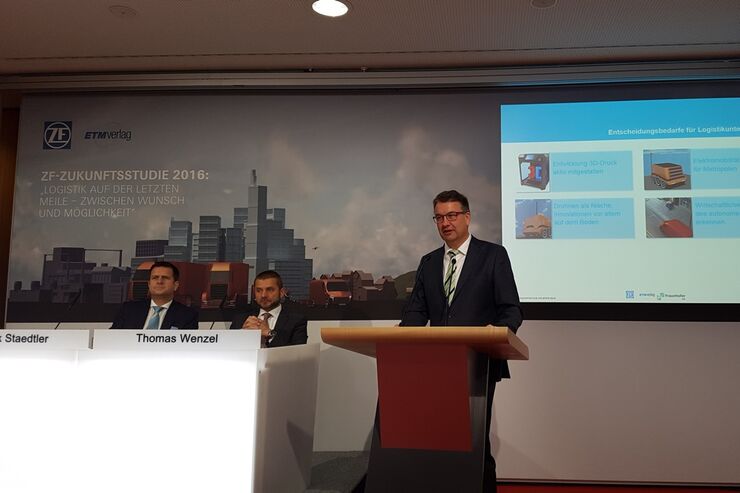 1/4 Director of the study Prof. Dr. Uwe Clausen of the Fraunhofer IML presents the most important results of the ZF Future Study 2016 at the Federal Press Conference in Berlin. Foto: Andreas Techel

The Fraunhofer Institute for Material Flow and Logistics (IML) has – on behalf of ZF Friedrichshafen AG – examined the expectations of end customers, legal and spatial frameworks, as well as technical trends and their effects in a 360-degree study. Across four chapters, the authors investigate factors such as electromobility, automation and digital networking, and how these may be involved in reshaping last-mile logistics to be cleaner, safer and more punctual. The ZF-Future Study 2016 is the third study on the subject of long-distance transport and was again conceived in cooperation with EuroTransportMedia Verlags- und Veranstaltungs-GmbH.

Parcel services are expecting more consignments than ever before this Christmas. This will pose challenges in crucial last-mile logistics. Experts predict the unchecked growth of online shopping to continue, and with it the number of deliveries. Both the demands of customers and a range of other factors – such as skills shortages and ageing workforces in urban and rural areas – will have pronounced effects on the last mile.
The Fraunhofer IML took this as their starting pistol to investigate the future of delivery logistics for cities, towns and rural areas on behalf of automotive supplier ZF Friedrichshafen. ‘Nowhere other than the "last mile" can such a concentration of future developments and possible logistical concepts be found', asserted Fraunhofer Institute’s Prof. Dr.-Ing. Uwe Clausen at the presentation of the ZF Future Study 2016 on 28. November 2016 in Berlin. "The goal was to develop a vision of the future", continued Clausen. The study presents a combination of analyses and facts. It also provides an appraisal of the forces at play in the "last mile," as well as recommendations for action and decision-making options for both business and politics.

"A new aspect is that the investigation is from the point of view of the customer, after all, the end cusotmer is the target of all activities in the last mile", explains Dr. Sebastian Stütz of the Fraunhofer IML, who co-authored the study. As such, the demographic shift plays a large part, as does the urban trend for same-day deliveries, such as in fresh food logistics. It isn’t just in the major cities that rapid delivery times are desired; there is also demand in towns and rural areas. Here, however, logistics service providers are subject to higher cost pressure due to the low population densities.

"From the end customer’s perspective, there is also the desire to make logistics greener and quieter", he adds. It is private persons in particular that find noise and pollution troublesome. Then there is the additional pressure of the EU stipulation to make deliveries in larger cities emission-free by 2030. As a result, electromobility, automation and digital networking will be relied upon to provide punctual and "clean" delivery logistics, states one of the study’s findings. Technological trends will offer opportunities to rise to face the challenges involved.

"Electricity-powered trucks are no longer the realm of science fiction", stresses Stütz. Following discussions with manufacturers, the experts expect serial-produced electric commercial vehicles to hit the market by the end of next year. "We see an opportunity to electrify our city centres by 2030", he adds. Until now, there has been reluctance by procurement officers and fleet managers to invest in electric vehicles for their last-mile delivery depots, as many are still largely unaware of the possibilities that the technologies offer. Despite this, the experts are convinced that the electric truck will quickly assert itself, as there is a great deal of economic potential to be leveraged in cities, where there is a high proportion of stop-start traffic. According to the study, the introduction of electric trucks in cities could save up to 60% of fuel costs. "And if you’re quiet, that even opens up the beginning and end of the day for transport logistics", explains Stütz.

Currently, small delivery robots are being employed and tested in Hamburg and Düsseldorf. "These robots have, in our view, great potential to heavily influence last-mile logistics, as they replace the traditional "push" principle with a "pull" principle", he adds. Currently, delivery agents still rely on luck to ensure successful delivery to the end customer. The opposite is true of the robots, who are informed by the customer that they are ready to accept the delivery.  The packets are held in a local buffer warehouse and transported, on-demand, the last three-to-five kilometres with the aid of a robot. Hermes and Metro project a delivery rate of 100 percent. Transport robots could complete up to 400 million deliveries in Germany every year by 2030, suggests the ZF Future Study. "Such dimensions were surprising, even for us", Prof. Uwe Clausen tells eurotransport.eu.

Self-driving vehicles are also ascribed an important role by the experts, yet delivery agents will not become superfluous. Much is already technologically possible, however, it still lacks general acceptance and answers to ethical and moral questions concerning safety and liability. Despite this, the experts are convinced that larger autonomous vehicles – which would resemble modern-day trucks – will develop step-by-step towards becoming driverless. This could be a solution to the problem of dwindling driver numbers. One conceivable possibility in urban areas would be that the vehicle follows the delivery agent during the delivery of parcels. In rural regions – currently an especially cost-intensive area for last-mile logistics – platooning may be employed. Platooning describes the concept of several vehicles driving in convoy, governed by a technical control system. This would mean only one driver would be required, rather than two or more.

Transport drones will continue to eke out a niche existence, the study proclaims. Due to current safety concerns and restrictive regulations, their usage is likely to be limited to special operations ­– such as providing medical supplies to inaccessible regions or islands. In addition, drones require far more energy in proportion to their payload than any land-based transport alternative. "We are therefore convinced that innovation will continue predominantly on the ground, in the form of transport robots" says Clausen.

Another innovation that has the potential to improve local supply is 3D printing – such as in the replacement parts and dental technology sectors. Using this new technology would allow the desired products to be produced on site, mimicking the effect of same-day delivery. There is no transport involved – at least not for the delivery of the item – and as such, the environmental footprint is made considerably smaller too. "It is important to regard innovations above all else as opportunities", emphasises the Professor. The study therefore recommends that last-mile logistics service providers, their employees and their organisational structures open themselves to change and play a part in revolutionising the world of logistics.

The ZF Future Study 2016 "The Last Mile" is available to download at www.zf-zukunftsstudie.de .