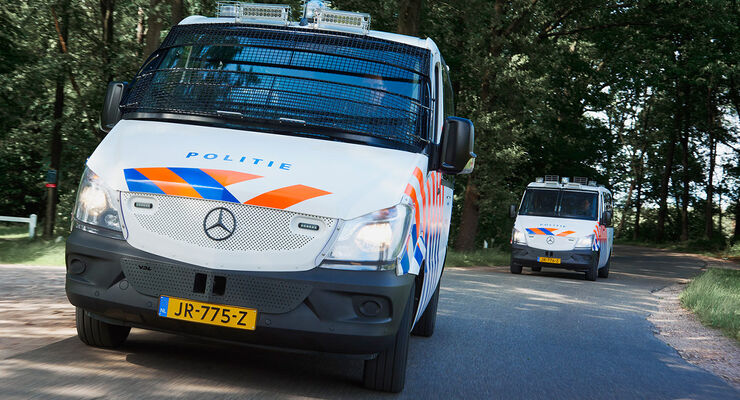 The police in the Netherlands has signed a framework agreement for 300 new Mercedes-Benz Sprinter 316 CDI. The first vehicles have already been delivered in November 2016.

"Our experience with various van models from Mercedes-Benz in the past has been very good. Thus, we are looking forward to putting our new Sprinter into service. They are excellent to drive and manoeuvre. This won us over", explains Gerrit den Uyl, director of the police services centre.

Before signing the framework agreement for the 300 vans, the authority put the Sprinter through thorough testing. It demonstrated its high overall quality and outstanding driving dynamics thanks to the 7G-TRONIC seven-speed transmission with torque converter. This automatic unit provides for smooth power transmission accompanied by reduced fuel consumption. In addition, the Sprinter's small turning circle enables maximum flexibility and simple handling – even when little space is available for manoeuvring. The Sprinter can accommodate eight police officers.

Vehicles are equipped with modern technology

The Dutch police's Sprinter are fitted out with state-of-the-art technical equipment, such as the National Operational Network System, which enables live images to be received from a police helicopter. The Position Monitoring System is employed for communications with the command centre. The Sound Commander enables the police officers to put out announcements to crowds up to 500 metres away from the vehicle. The scope of equipment also includes white blinder lamps on the roof. The conversion measures have been carried out among others together with the Dutch VanPartner by Mercedes-Benz VDL Bus Venlo bv.