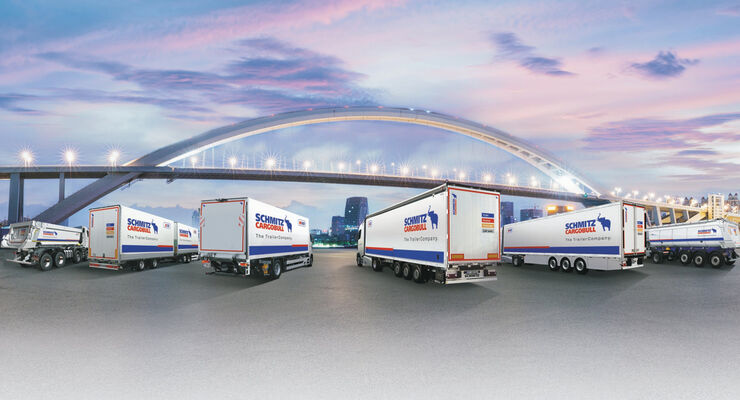 Trailer manufacturer Schmitz Cargobull delivered more than 50,000 vehicles and increased turnover to €1.7 billion* in the business year 2015/2016 – an increase of more than 12 percent* over the previous year.

“Once again, the important volume markets of Western and Central Europe grew by more than 20 percent,” reports Andreas Schmitz, who took over as Chairman of the Management Board within the framework of the company's succession programme at the beginning of the new business year on 1 April 2016. Together with the new Management Board he presented the latest trailer innovations, whose debut will be celebrated at the IAA Commercial Vehicles in September

“The modular system of the GENIOS trailer generation has been very well received in the market,” reports Andreas Schmitz. The I-beam, which is cold-formed from a blank, in combination with a bolting technology that has proven itself over the course of many years, offers a wide range of options for customer-specific configuration of the trailer. Standardised features ensure superior quality while reducing maintenance costs. “In the interest of our customers our attention is constantly focused on the total cost of ownership of our vehicles,” explains Andreas Schmitz. The integrated refrigeration unit with a new temperature sensor system, as well as Schmitz Cargobull trailer telematics, set benchmarks in the industry. “In particular our proactive service offers a major advantage and economic benefits for our customers,” says Andreas Schmitz.

Schmitz Cargobull delivered more than 50,000 vehicles in the business year 2015/2016 (previous year: 44,000). Turnover grew by more than 12 percent to around €1.7 billion*. An order intake amounting to more than 53,800 units was achieved. The capital expenditure of €31 million was financed from cashflow.

At the main plant in Altenberge, new decoiling and laser cutting facilities for the chassis blanks were installed during the business year. The investment volume required for this new equipment amounted to approx. €4 million. The equity quota was just under 60 percent*. Important projects for new investments include the rebuilding of the FERROPLAST works in Berlin and further reorganisation of the production line in Altenberge. During the past business year, Schmitz Cargobull employed 5,200 employees on average.

“In spite of general economic uncertainty, the demand for trailers has developed very positively in Central and Western Europe since the new year began”, reports Boris Billich, the new Sales Director. After their investments in tractor units within the framework of the Euro VI introduction, transport companies now have finance available again for the modernisation of their trailer fleets. “Moreover, customers are feeling a marked relief as a result of low fuel prices”, says Boris Billich. However, the situation continues to be difficult in Russia, where the trailer market has experienced a severe slump following the restrictions for transport companies, as well as the Ukraine crisis and the declining revenues from raw materials. “Nevertheless we see great opportunities for the Russian market in the longer term and therefore will remain active there,” says Andreas Schmitz.

Production and sales activities in China

In 2015, the first pilot production started at the plant in the Chinese city of Wuhan. Currently 100 persons are employed at the Wuhan plant. “The Chinese truck market contracted by a quarter in each of the past two years,” reports Andreas Schmitz. In this difficult environment the sales team is pressing ahead with market development. At the same time the trailers are being constantly developed further for the specific requirements in China.

Orders received in France, Spain, Italy and the UK have also clearly grown during the first quarter of the new business year. At around 16,000 units, the order intake at the end of June was about 25 percent above target. A large order from Lithuania for more than 540 vehicles (410 reefer semi-trailers, 130 curtainsiders), as well as more than 20 percent growth in Poland and the Czech Republic, give an indication of the robust development in Central Europe. In Russia and Ukraine the situation continues to be difficult. “According to our rather conservative plan, vehicle sales should reach more than 47,000 units in the current business year,” says Andreas Schmitz. “However, unless the current demand receives an unexpected dampener, this target could be clearly exceeded”.

Tailwind for the new Board of Management team

With the beginning of the business year 2016/2017 on 1 April 2016, the planned generational change was completed.

For almost 100 days so far, Andreas Schmitz has assumed responsibility as Chairman of the Management Board for the departmental divisions Corporate Strategy, Public Relations, Emerging Markets, Schmitz Cargobull Wuhan (China) and Value Added Services.
At the same time, Boris Billich (with the company since 1 January 2016) has assumed executive responsibilities for International Sales.

Roland Klement has headed Research, Development and Validation since 2012, and took on responsibility for the Box Vehicles product line from the beginning of the new business year 2016/2017.

Andreas Klein has headed the Operations division with responsibility for Production, Logistics and Quality Assurance since April 2015. He also took over the product lines Platform and Tipper Trailers in April 2016.

Andreas Busacker has been responsible for the Finance division since April 2015 and also took over Group Audits, Central Purchasing, Business Processes/IT and Human Resources in April 2016.

“Once again, we have made the structure more effective,” reports Andreas Schmitz. So they can work with one another directly as a team, all board members have moved their offices to the head office in Horstmar. Fast communication and the favourable location between the two main plants in Altenberge and Vreden are expected to provide additional tailwind.