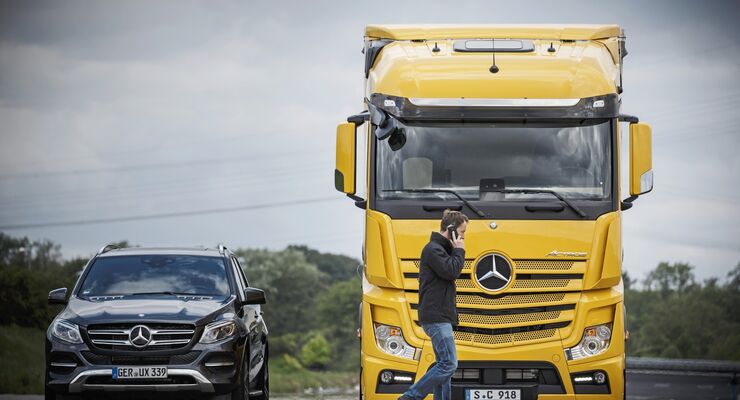 Daimler (halls 14 and 15) was quick to implement Euro-6 trucks, and has continuously been improving them in regard to fuel consumption. One example is the Actros, or rather the engines OM470, OM471 and 473. A lot has happened on the current Actros and its drive technology since the presentation in 2011. The 12.8 liter OM471 started first in 2015; the OM470 (10.7 liters) and OM473 (15.6 liters) followed in 2016. The most important changes: increased pressure from 900 to 1.160 bar in the common rail system, as well as enhanced injection pressure of up to 2.700 bar. Added are also increased compression from 17.5 to 18.5 bar, and – very important – a tendency towards estrangement from exhaust gas recirculation (EGR).

Less EGR and more SCR lead to less diesesl consumption and a little more Adblue consumption. New: a 456 PS strong version of the OM470, whose performance formerly reached 428 PS. Mercedes promises three to six percent diesel saving thanks to this redesigned drive technology. New on the IAA 2016 is also the emergency brake asssitant Active Brake 4 and the turning assistant system. Both systems are able to recognize pedestrians and cyclists, which wasn’t possible until now. This will especially prevent accidents while turning off or at intersections while driving at slow speeds.

For Mercedes, the IAA 2016 also stands for 20 years of Actros. Enough reason to offer a special edition limited to 200 vehicles. The basis of this vehcile is a 4x2 semi trailer, outfitted with the high-roof cabs Big Space and Giga Space, which draws attention to its exterior with lots of chrome, stainless steel and xenon headlights. Abundant features are also included. Installed are all the safety systems, from the latest to the ones that have already been available for some time.